Celebrate the U.S. Navy Birthday with a Look at Navy Helicopters 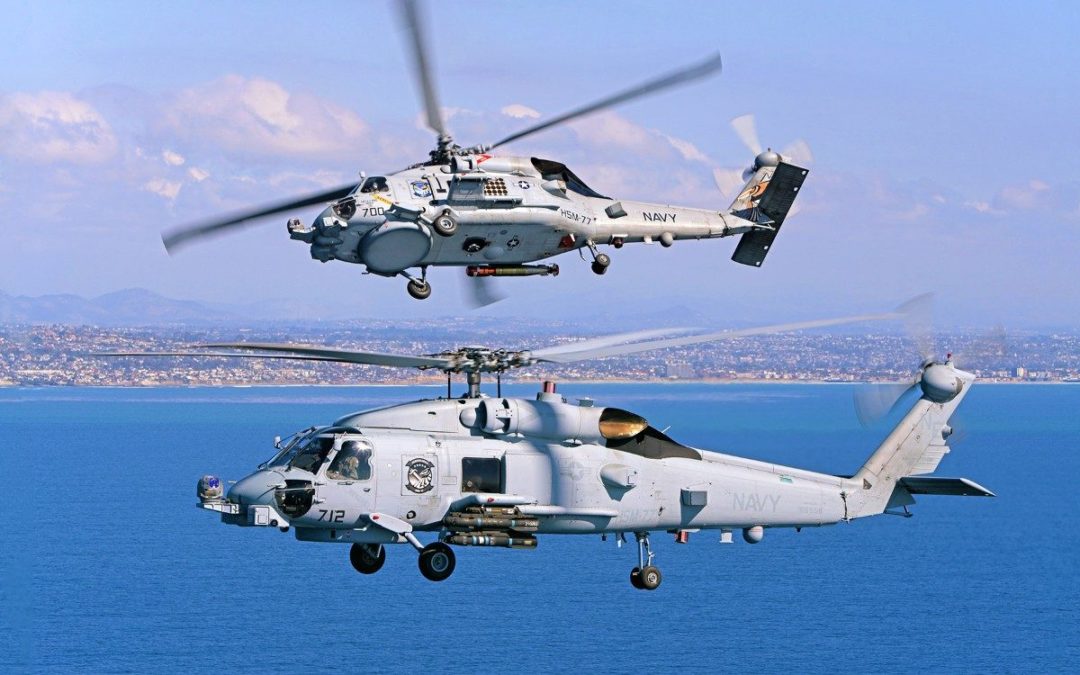 Skycore Aviation, a Black Hawk UH-60 provider, congratulates the U.S. Navy as it celebrates its 243rd birthday with a look at the Navy helicopters that have served our nation.

Beginning in November 1946, the Navy received its first Sikorsky H-5, designated HO3S-1.  This version of the H series helicopter had a new, longer fuselage for two persons in tandem, was equipped with blade-folding rotors and externally mounted rescue hoists. The HO3S-1 was used for utility, rescue, and mercy missions throughout the world including Antarctica and behind enemy lines in Korea. 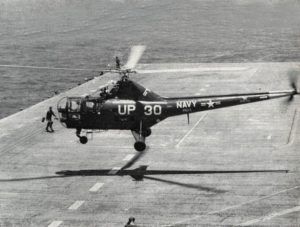 The Navy later added ten H-19 Chickasaws, designated HO4S-1, in 1950.  From August 1950 through January 1958, the Navy purchased 129 HO4S-1 helicopters for its ASW (anti-submarine warfare) squadrons.  Innovations such as the forward placement of the engine below the crew compartment and in front of the main cabin, the use of offset flapping hinges located nine inches from the center of the rotor and the use of hydraulic servos for the main rotor controls were included in the HO4S-1 design. 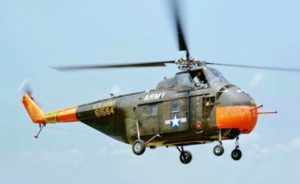 Starting in 1950, the Navy purchased 29 HTK-1s through 1953 for training through a contract with Kaman.  In 1954, as the result of an experiment by Kaman and the Navy, a HTK-1 was modified and flew with its piston engine replaced by two turbine engines, becoming the world’s first twin-turbine helicopter. 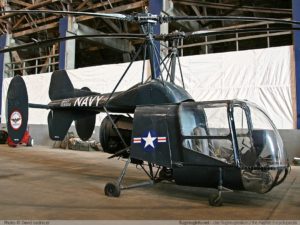 The Sikorsky S-52 utility helicopters were added to the Navy fleet in 1951 and designated as HO5S-1.  This aircraft was a two-seater and the first US helicopter with all-metal rotor blades using a 178 hp Franklin air-cooled flat-six piston engine.  It set several speed and height records for the time. 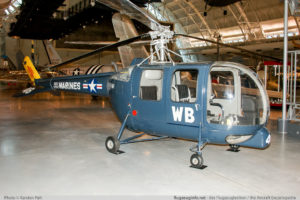 In 1952 the Navy awarded Sikorsky a contract for an anti-submarine warfare S-58 helicopter designated the XHSS-1.  The first XHSS-1 first flew in 1954 with production deliveries beginning in early 1955 and ending in 1966 for a total of 385 Navy aircraft.  Equipped with a piston engine, the XHSS-1 served mostly as a medium transport helicopter. 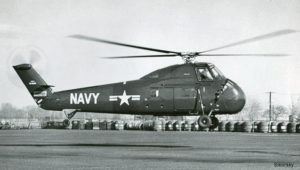 To overcome the growing threat of Soviet submarines, the Sea King prototype SH-3 (originally designated as XHSS-2) flew its maiden flight in in March 1959.  It was specially designed to be an all-weather dipping sonar platform, equipped with Doppler radar integrated in an automatic approach and hover system.  The aircraft HSS-2 was later designated as SH-3A. The Sikorsky designation for the military aircraft was S-61 with civil versions named S-61L and S-61N. 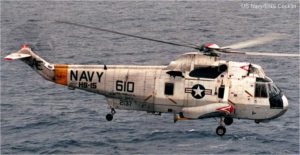 The Navy also started to accept deliveries of the UH-2A and UH-2B Kaman Seasprite helicopters in December 1962.  These two models differed only in electronic equipment. The UH-2 was delivered for service with detachments aboard aircraft carriers and used as compact, fast-moving rotorcraft for utility and anti-submarine warfare missions. 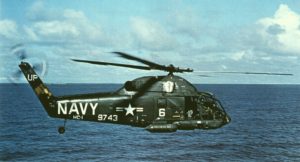 The Cold War to Present

The Boeing Vertol CH-46A, medium-lift tandem rotor helicopters powered by twin turboshaft engines, was added to the Navy fleet in 1964.  Known informally as the “Phrog” and formally as the “Sea Knight”, it was operated across all operational environments between its introduction during the Vietnam War and its front-line retirement during 2014.  It was deployed to provide all-weather, day-or-night transport of combat troops, supplies and equipment.

The CH-53A helicopters, a ten-ton lift aircraft powered by two T64-GE-6, 2850 shp engines driving a six-blade main rotor, were added and deployed to Vietnam in 1967. It was known as the Sea Stallion and was part of the Sikorsky S-65 family of heavy-lift transport helicopters.  The Sea Stallion was used in assault transport (heavy equipment), aircraft recovery, personnel transport, and medical evacuation roles.

A more powerful version of the Sea Stallion, the CH-53D, completed its maiden flight in 1969. The aircraft was part of the Sikorsky S-65 heavy-lift transport helicopters and were flown alongside the CH-53A in Vietnam beginning in 1970.  A variant used for mine sweeping was designated RH-53D and a VIP transport version the VH-53D.

Although production for the predecessor aircraft SH-2 had been halted, in October 1971, the Seasprite SH-2F was selected by the Navy as the platform for the interim Light Airborne Multi-Purpose System (LAMPS) helicopter.  The new variant had greatly enhanced anti-submarine and anti-surface threat capabilities.  The SH-2F increased shipboard sensor and weapon capabilities against several types of enemy threats, including submarines of all types, surface ships and patrol craft that may be armed with anti-ship missiles.

The Cold War to Today

After a number of variants, Sikorsky developed the S-80, designated CH-53E Super Stallion, in 1974.  The CH-53E had three engines compared to the former configuration which had just two.  The titanium-fiberglass composite main rotor included a seventh blade.  The new fuselage stretched 6 feet 2 inches.  The former tail configuration was replaced by a larger vertical tail and the tail rotor tilted from the vertical to provide some lift in hover while counteracting the main rotor torque. The aircraft had improved avionics including a new automatic flight control system and a digital flight control system that prevented the pilot from over-stressing.

Since the 1980’s the Navy has deployed the Seahawk, a twin turboshaft engine, multi-mission helicopter in a number variants.  Beginning with the SH-60B, based on the U.S. Army UH-60 Black Hawk, the Navy currently flies the MH-60R and MH-60S, all members of the Sikorsky S-70 family.  The Seahawk is designed to operate from destroyers, frigates and cruisers in performing its role in the Light Airborne Multi-purpose System (LAMPS) anti-submarine mission as well as search and rescue, medical evacuation and general fleet support.  It’s sensors include the Aircraft Survival Equipment (ASE) package, Forward Looking Infrared sensors, the multi-mode radar and “friend or foe” interrogator, an advanced airborne fleet data link and an advanced airborne active sonar.  The MH-60S is unofficially known as the “Knighthawk”.  Starting in 2014, the MH-60S was deployed to operate the Airborne Laser Mine Detection System (ALMDS) designed to detect, classify, and localize floating and near-surface moored mines in littoral zones, straits, and choke points. 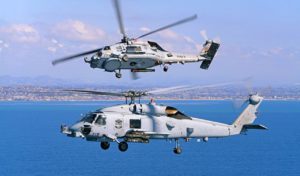 Skycore Aviation, an international helicopter personnel services and UH-60 Black Hawk provider, Blackhawk 360, salutes the U.S. Navy as it celebrates its birthday and continues to protect our country.  Skycore knowledge and experience enable us to provide personnel and turnkey solutions for helicopter programs tailored to meet our customer’s operations, maintenance and training needs.  To stay atop of the rotary wing industry, follow us on Twitter, LinkedIn or Facebook.