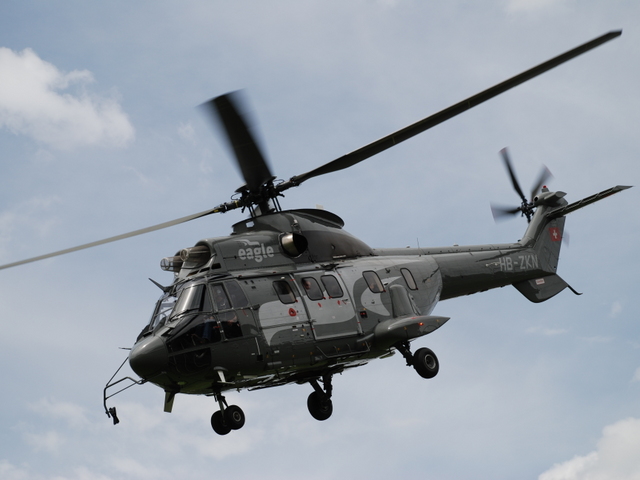 Skycore Aviation resumes its series of articles on the family of Super Puma helicopters, this time examining the Eurocopter AS332 which was later re-designated as the Airbus H215 Super Puma.

The AS332 Super Puma was introduced in 1990, built to succeed the SA330 Puma as a medium weight utility helicopter able to support multiple mission needs.  Its large cabin, lift capability and power reserves support civil and para-public uses.  The AS332 has been extremely popular from its inception and between July 1981 and April 1987 there was an average production rate of 3 helicopters per month being built for both civil and military customers. By 2005, the Super Puma (in different variants) was operated by 38 different nations.  In 2014 with the renaming of Eurocopter to Airbus, the AS332 was also renamed as the Airbus H215 Super Puma.

In 1990, the military Super Puma designation was changed from AS332 to AS532 Cougar to distinguish between the civil and military variants.  Airbus markets their version of the AS532 as the H215M Cougar which is in use by NATO and many militaries in Europe and throughout the world.  Skycore will feature the Cougar in an upcoming article in this series. 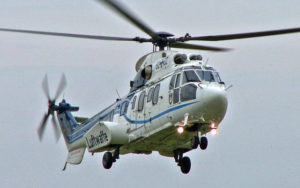 The power of the Super Puma was significantly enhanced by replacing the Turbomeca Turmo engines with Turbomeca Makila 1A1 turboshaft engines.  The new engines drive the Super Puma’s four-bladed main rotor and five-bladed tail rotor, a pair of electrical alternators and separate hydraulic systems.  As a result, sling load lift capability was increased by 80% for a maximum lift of 9,920 lbs.

The overall length of the Super Puma increased almost 2 feet from the SA330 with space added to the cabin to provide seating for up to 3 additional passengers or additional cargo.  The current H215 is available in two versions, one configured for multi-role operations and the second built with a shorter cabin airframe.  From a safety perspective, the Super Puma adopted a new crashworthy undercarriage, transmission deck, cockpit flow and composite rotor blades able to withstand a level of battle damage. 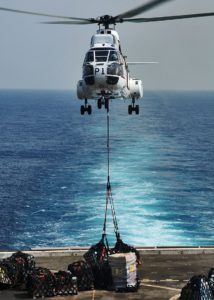 The AS332L1 is a stretched civil version of the Super Puma with a long fuselage and an airline interior for personnel transport.  As with utility helicopters built for multiple roles, mission equipment enhances operational capability.  The mission equipment designed to support offshore utility transport for the AS332L1 are as follows.

An AS332L1 on a law enforcement mission

Operational History of the Super Puma

The Super Puma has incurred problems with its main gear box which coupled by improper maintenance and inspection procedures was fatal.  As a result, Airbus  made design and material improvements to the Super Puma to address fatigue failure and increase reliability.  These changes include replacing parts in gearbox with more resistance, reducing its life limit from 4,000 to 1,000 flight hours, an enhanced anti-spalling system and a strengthened inspection criteria, along with equipment allowing a more detailed analysis of particles.

The Super Puma is also used as a VIP aircraft for heads of state.  The Brazilian Air Force uses two Super Pumas to transport the President of Brazil using the designation V-34. These main presidential helicopters have been configured to carry up to fifteen passengers and three crew members

Militaries around the world use the Super Puma today.  The Royal Saudi Navy has 20 in its fleet.  Argentina uses Super Pumas to fly transport missions while Chile flies 7 for SAR and anti-submarine warfare (ASW).   Many countries have purchased the C1 variant.  In 1998, the Greek Merchant Marine purchased AS332C1 Super Puma helicopters for surveillance and SAR missions and in late 2000 the Greek Air Force purchased four helicopters for CSAR and SAR.  The Bolivian Air Force also ordered 6 AS332C1e helicopters in 2014 to fight drug trafficking and perform other civil security and public service duties across the country.  Airbus has also established manufacturing of the Super Puma in Romania.